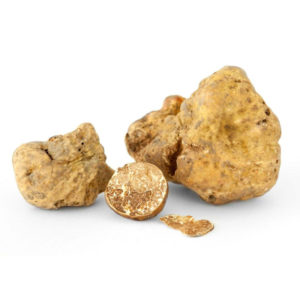 The white truffle precious is considered the most important among the qualities of truffles since it has a relevant commercial importance.

It is a symbiotic, hypogean fungus, which grows at variable depths, from a few centimeters to over one meter in clayey soils, often along streams and sometimes in sandy riverbeds.

It has a globular appearance, with numerous depressions on the external wall (peridium) that make it irregular. The external surface is smooth and slightly velvety. The color varies from cream to pale ocher. The inner part (the gleba) is white and greyish-yellow with very small white veins, sometimes tinged with red-pink. Its scent makes it unique because it is pleasantly aromatic.
Among the most important areas of Italy for the collection of this quality there are the Crete Senesi, just a stone’s throw from our business.

The collection of white truffle usually takes place from October to December.

Do you want to live the experience of truffle hunting?

Call us, write us an email or visit us in Piazza del Campo to get more detailed information: we will take you into the woods around Siena to experience the unique thrill of truffle hunting!